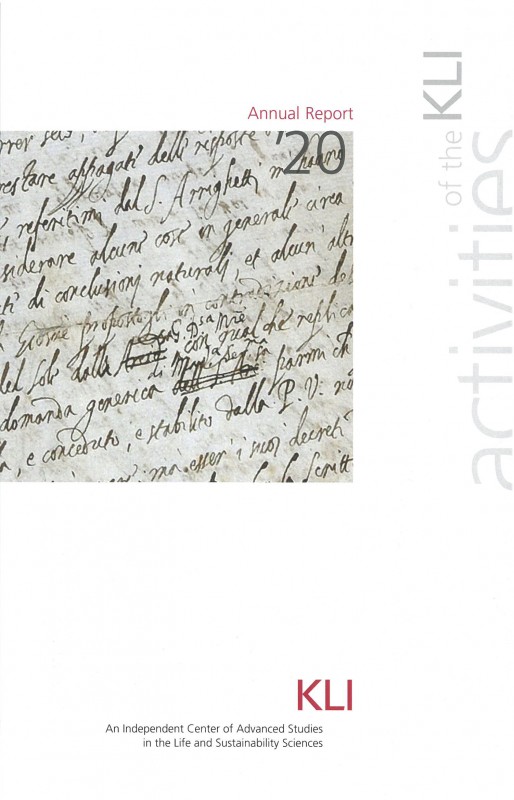 The 2020 KLI annual report is out! Download (pdf) the report to read about the scientific projects we hosted last year, our meetings, working group, the EASPLS summer school, special events, our publications, and our prizes, science communication and outreach, and professional development programs.

The Year in Review

One year into the Covid-19 pandemic, the KLI has adapted to the challenges that came with it. Strict health and safety measures had to be implemented. Regrettably, the KLI fellows had to spend a lot of their precious fellowship time in home office, quite in contrast to the ambition of the KLI to foster personal interaction. Nearly all meetings and lectures had to be held as virtual events, except for the rare times when personal meetings were possible. One benefit of this situation was that our online seminars could now be joined by many more participants from all over the world. This increase of visibility was further enhanced by an expanded use of social media in the dissemination of the KLI activities.

Despite the pandemic, we received a large number of applications from international researchers. In addition, a dedicated call for Writing-up Fellowships in the area of “Interdisciplinary Sustainability Science“ attracted nearly 100 applicants. Altogether, in 2020, we hosted 31 fellows, most of them in residence, as travel restrictions made it possible for only 7 visiting fellows to come to the KLI. In order to help alleviate economic hardships for the fellows due to bottlenecks in the job market caused by the pandemic, a KLI Solidarity Grant was established that permits an extension of the fellowship period. So far, three fellows have benefited from this support.

2020 also saw the implementation of several new event formats: Working Groups that comprise 3 meetings over the course of one and a half years; the “KLI Lab,“ an in-house meeting format that provides space for reading groups, discussions, talk rehearsals, or informal lectures; new events on Science Communication, an increasingly relevant practice for scientists, organized by the KLI postdocs. Although the year has been challenging for all of us, especially those fellows were affected who came to Austria on their own and did not have time to establish a network of friends before the various periods of lockdown. We have tried to make their experience as positive as possible, providing support in all administrative matters and ensuring continued interaction through the virtual platforms.

Images in the Report

Put together by neuroscientist and executive director Isabella Sarto-Jackson, the images of the annual report come from a range of thoughtful sources. We list them below for your enjoyment.

The cover image is Galileo Galilei's letter to Benedetto Castelli (1613). It is a long-lost & re-appeared letter in which he laid out his arguments against the church’s doctrine that the Sun orbits the Earth. Later, he edited his blasphemous ideas to fool the Inquisition by lying about his edits. Read more about it here. 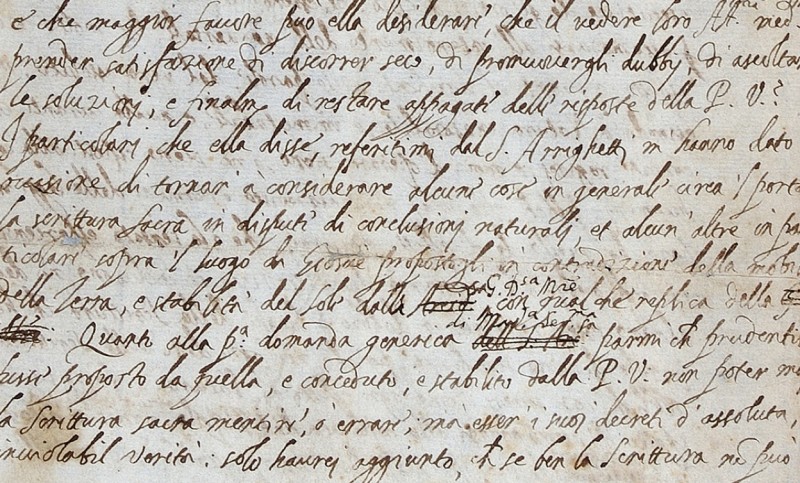 Fig. 2 of the report is from Iconographia Mendeliana (Brno, 1965): reprint of the only remaining record of Mendel´s experiments, know as "Notizblatt." It shows recessive epistasis in Phaseolus (R.A. Fisher). 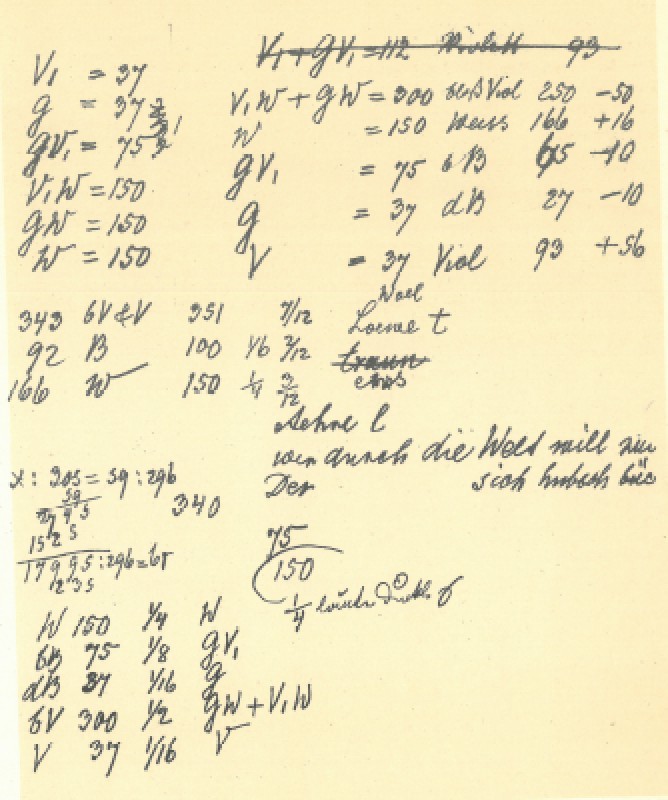 Fig 3 is is from Darwin's letter to Alfred Russel Wallace (1866) in which he compliments Wallace on recent publications. Darwin also mentiones that plants appear to inherit discrete rather than blended characteristics. 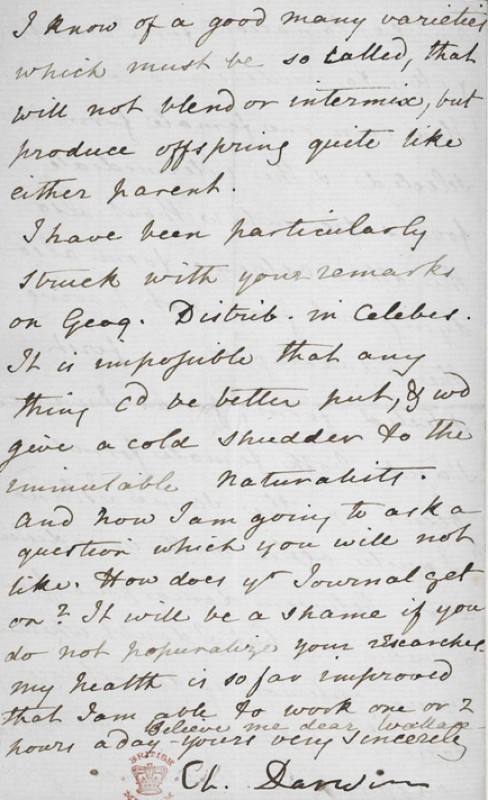 Fig 4 is "Codex on the Flight of Birds" by Leonardo da Vinci (1505) in which he examined avian flight behavior with the aim of elucidating mechanisms that can be used to construct flying devices. 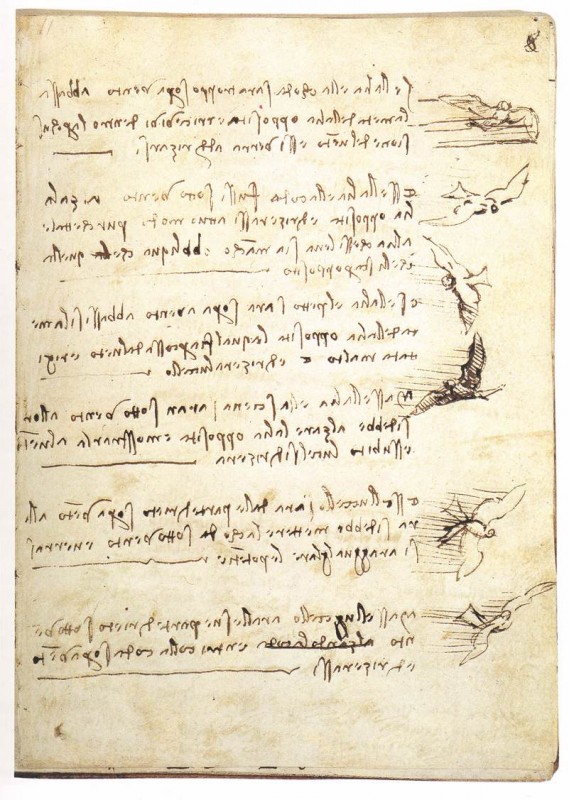 Fig. 5 is an image of Leo Pardi's annotations in R.A. Metcalf's "Measuring Fitness in Social Insects" (1980). Guido Caniglia  found the document in the archives of the University of Florence. 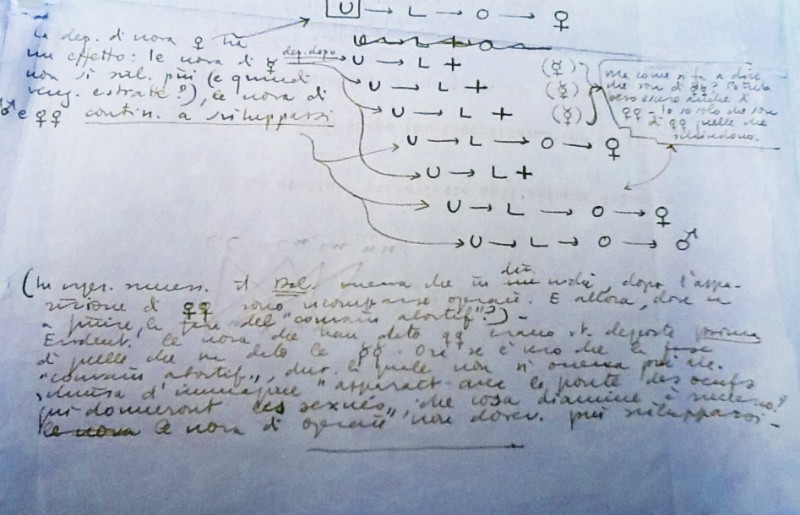 Fig. 6 is from the KLI archives. Konrad Lorenz's annotations in the draft of Karl Popper's "The Rationality of Scientific Revolutions." Before publishing his paper in 1975, Popper gave a talk in the Herbert Spencer Lecture (1973) on that topic. 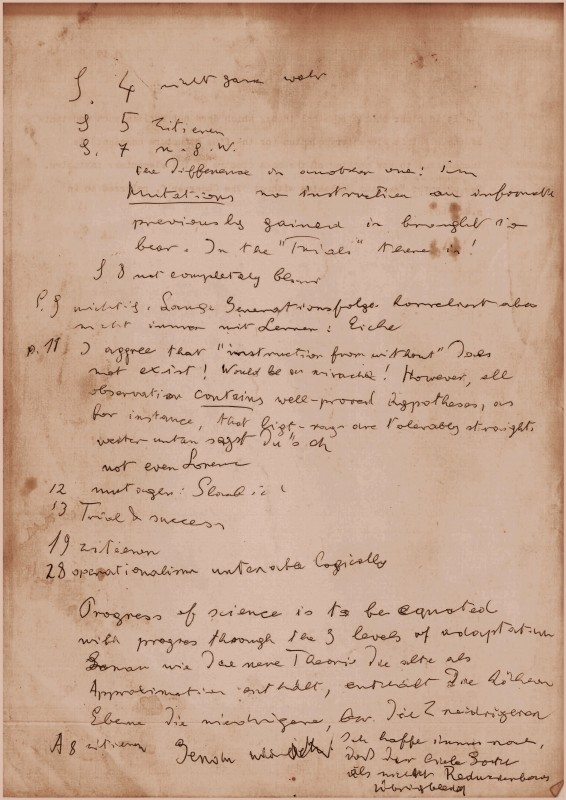 Download the report by clicking the cover here.
edited by Lynn Chiu