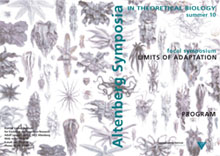 Focal Symposia
Limits of Adaptation
Universitätszentrum Althanstraße, Pharmaziezentrum, University of Vienna, Austria
Organized by KLI for Evolution and Cognition Research, Altenberg, Austria and the Department of Theoretical Biology, University of Vienna, Austria
Can natural selection explain all aspects of biological evolution? Charles DARWIN himself famously didn´t think so (e.g. he invoked ´disuse´ as the main explanation of the degradation of rudimentary organs). In the early decades of the 20th century, natural selection and adaptation were often treated ´almost apologetically´ (Van Valen 2009: 267), to the point that speciation was often seen as a non-adaptive process. Not until the late 1930s and ´40s, when convincing evidence for the importance of selection had accumulated, did adaptation become a central focus in evolutionary studies. Dismissing genetic drift as an important evolutionary force, the Modern Synthesis (synthetic theory of evolution) adhered to a strictly adaptationist account of evolution. Adaptationism ´hardened´ along with the Synthesis in the 1950s, reaching its apex in the late 1970s in ´pop´ sociobiology and ´pan-selectionist´ molecular biology. Through the popular scientific writings of Richard DAWKINS, this ´old´ adaptationism conquered the general media, where it lives on in daily announcements of the discovery of yet another gene ´for´ this or that trait. Adaptationism came under serious attack toward the end of the 1960s, when George C. WILLIAMS criticized vague invocations of group or species selection, proposals on optimization for which their seemed to be no viable mechanism, and other infirmities of adaptationist reasoning. Simultaneously, Richard LEWONTIN’s work on population genetics began to lay bare considerable amounts of evolutionary differentiation between species and great genetic variation within populations — two sorts of evidence that could not be plausibly explained in purely selectionist terms. Concern about the limits of adaptationist explanation was further fueled by GOULD and LEWONTIN criticizing adaptationism as an unscientific attitude that views all traits of organisms a priori as optimal ´solutions´ produced by natural selection, specifically for current function. They stressed instead the importance of the contingencies of history — structural or developmental constraints as studied in current evolutionary developmental biology (´Evo-Devo´), drift, gene flow, etc. A serious new challenge for adaptationism comes from EvoDevo; it relates to the remarkable conservatism that is increasingly found in the ´developmental-genetic toolkit´ across all animal phylo-geny. Such conservation is profoundly paradoxical from the Synthesis perspective. Other challenges come from comparative genomics and systems biology. Thus, according to Koonin, ´evolutionary-genomic studies show that natural selection is only one of the forces that shape genome evolution and is not quantitatively dominant, whereas non-adaptive processes are much more prominent than previously suspected.´ Debate over empirical, conceptual, methodological, and other aspects of adaptation will continue, but at a ´higher level´ — or so one may hope.
Download Document