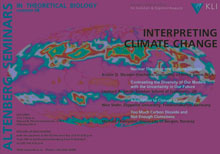 Focal Symposia
Interpreting Climate Change
Universitätszentrum Althanstraße, Pharmaziezentrum, University of Vienna, Austria
Organized by KLI for Evolution and Cognition Research, Altenberg, Austria and the Department of Theoretical Biology, University of Vienna, Austria
Climate change refers to variations in the Earth’s climate on many different time scales — from decades to millions of years. This seminar deals, among other things, with the possible causes of such variations. ´Climate change´ is often used in a restricted sense to denote a significant change — such as a change having important economic, social, or environmental effects — in the mean values of a meteorological element (in particular temperature or amount of precipitation), where the means are taken over periods of the order of a decade or longer. In the most general sense, climate change encompasses ´all forms of climatic inconstancy (that is, any differences between long-term statistics of the meteorological elements calculated for different periods but relating to the same area) regardless of their statistical nature or physical causes´ (Arctic Climatology and Metereology Primer)[1]. Climate change may result from changes in solar activity, long-period changes in the Earth´s orbital elements (eccentricity, obliquity of the ecliptic, precession of equinoxes), natural internal processes of the climate system, or — the factor that, obviously, most often catches people´s imagination — anthropogenic forcing, such as increasing atmospheric concentrations of carbon dioxide and other green-house gases. Even if some actors continue to stubbornly deny it [2], the very sophisticated climate models that have been developed in the last twenty years ´justifiably provide an additional strand in the argument that anthropogenic climate change is a critical global problem´ [3]. Whenever such models are used to develop policy, however, uncertainties of all kinds emerge that may seem to make the task insurmountable (cf. our Summer 2004 seminar, ´Living Dangerously: Coping with Risk and Uncertainty in Complex Biological Systems´). Where to derive confidence from? Three of the eminent speakers in this seminar (SMITH, STEHR, and THOMPSON) will deal with uncertainty and risk as related to climate change and scientific and political strategies to cope with it (and, as STEHR emphasizes, adapt to it) from a number of (inter)disciplinary perspectives, whereas SHRADER-FRECHETTE will investigate the question what energy techniques best address climate change. [1]. National Snow and Ice Data Center, Boulder, CO, USA; http://nsidc.org/arcticmet/glossary/climate_change.html [2]. Thus, for Vaclav KLAUS, the President of the Czech Republic, global warming is but a “myth”; see, e.g., http://motls.blogspot.com/2007/02/vclav-klaus-about-ipcc-panel.html [3]. STAINFORTH DA, ALLEN MR, TREDGER ER, SMITH LA (2007) Confidence, uncertainty and decision-support relevance in climate predictions. Philosophical Transactions of the Royal Society A 365: 2145-2161.
Download Document